Two hours ago I experienced the scariest moment in the US. A drunk guy kept knocking and kicking at the door.  I called 911 for the first time in my life. Accurately, my roommate Xiangbei made the phone call.

At first, I heard the music “We’ll Rock You.” I guesses it could be my roommate Ya. She left the house early in the morning to watch the Marathon. But then a drunken voice came: “who can open the f**king door for me.” It could not be Ya then. He kept knocking the door and shaking the lock, until we started talking to him.

We asked him who he was and whom he was looking for, but we could not understanding what he spoke. Not a word. Well…we are not good English speaker, but he was doing nonsense talking.

“We don’t know you. We’re afraid we can’t open the door for you.” I said. “Just open the f**king door!” He shouted and started kicking the door. We were shocked. I could even feel the whole house shaking. “Is it legal to carry a gun in Massachusetts?” I asked my roommate Lin. “I guess so,” she answered, “He may have one.” He didn’t need a gang to open that thin wooden door. He just needed his feet.

Then we decided to call 911. We might watch too many crime TV series, but at that moment, we were just frightened. I have never made any emergency calls before. Never.

The police arrived in 2 minutes. They said there was a drunken man with red hair in the first floor. It might be him. 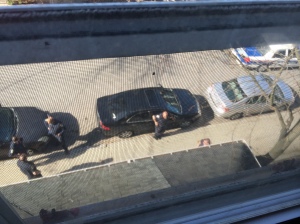 I always complain about the Chinese toasting culture. It seems you are not respectful enough if you are not drunk, when you are doing business, or meeting friends. But the Americans have your own drunken culture.

Every weekend, I can hear drunken people shouting, and hitting bottles on the road outside my window. Last Thursday, I saw a strong man holding a bottle of beer, shouting: “This is the best beer in the world!” when I was waiting for green line at Hynes Station. He shouted to everybody in the station, asking them to repeat his words. “There is only one god in the world!” He burst out.

Another afternoon, when I was walking on the road, a drunken man stopped me, pointing me with his forefinger. “Give me your hot dog!” He said, “I want your hot dog! Give it to me!” I could do nothing but kept walking. Then he laughed, “I’m just kidding! I don’t want your hot dog at all.” It might just be a special American humor, but I was quite embarrassed and scared.

I used to think the US was  dangerous. So did my parents. But when I start to take it as the safest place in the world, it  scares me with drunkards.

Moments As a Foreigner

Questions I don’t know how to answer